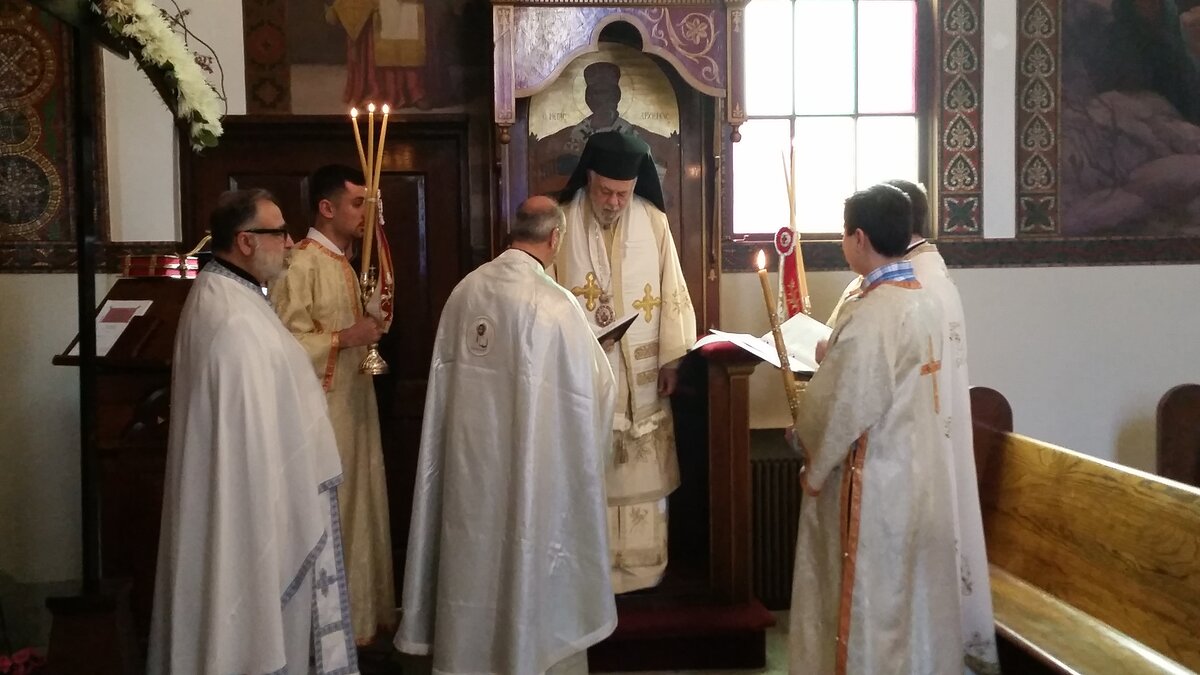 ~ His Grace, Bishop Dimitrios of Xanthos, celebrates vespers for the 100th Anniversary of the Parish ~

On January 5, 1914, in a coffee house on Clinton Street, three men met on the Eve of the Theophany. As they reminisced about the observance of the holy days in their homeland, the idea to found a church of the Orthodox faith in their new country was born. These three men — James Stathelopoulos, Nicholas Contompasis and Anthony Svolos — encouraged by their friend Alexander Karastathes, appealed to thirteen Greek families to support the establishment of an Orthodox church. A committee was formed and plans were made.

A two-family wooden house located at 107 Clinton Street was purchased for the purpose of using it as a church. On April 19, 1915, is recorded the legal transaction of the transfer of property at 107 Clinton Street for the sum of $1.00 from Mr. & Mrs. Tom Kansas, Mr. & Mrs. Anthony Svolos, Mr. & Mrs. Nicholas Contompasis and Mr. & Mrs. Alexander Stathes to the Hellenic Orthodox Church of St. George. On this same date the certificate of incorporation of the Hellenic Orthodox Church of St. George of Schenectady, New York was signed, executed, and acknowledged by the first priest of St. George Church, Rev. Andreas Constantinides.

Over the next 23 years the parish grew with the influx of Greek immigrants to Schenectady, but the Great Depression of the 1930s prevented any thought of expanding the small church. Divine Liturgy was held on the second floor and Sunday School, Greek School and social activities took place on the first floor.

A devastating loss occurred on February 7, 1937 at 3:14 a.m. when a fire of unknown origin erupted and the church was completely destroyed. Determined to rebuild their church out of the ashes, the 150 member families joined together to raise $45,000, and the cornerstone for a new church was laid in September of 1937. During those difficult economic times it was an enormous sum of money because the Great Depression which hit Schenectady in 1931 had forced many Greek businesses to close their doors. Parishioners met in the school room of the Swedish Baptist Church on Swan Street while construction of the new church was underway, and Turner’s Hall on Albany Street also served as a temporary church headquarters. In 1939, the new — and present day — St. George Greek Orthodox Church was completed.

The parents, grandparents, aunts and uncles of many of the present day parishioners came to the United States and settled in Schenectady during these early years. They began their own businesses by opening up eateries, or selling fruit and dry goods. They became model citizens in their newly adopted home and helped to shape the booming economy of the post World War II years in Schenectady. During the war years, St. George Church was very active in purchasing War Bonds (a total of $6,300) and worked diligently with the Greek War Relief. In 1941 the Greek citizens of Schenectady presented the local Red Cross Chapter with a check for $500 — the largest single donation in the world to this organization.

During the 1950s the parish continued to grow and soon the basement of the church could not adequately accommodate the social functions and other programs of the church members. Eventually the idea for a larger, separate facility was born. Five lots on Liberty Street adjacent to the church property were purchased. On April 23, 1961 the cornerstone was sealed in place and on June 11, 1961 the Hellenic Center officially opened. His Eminence, Archbishop IAKOVOS of North and South America, traveled to Schenectady to attend the Dedication Ceremony. Among the many dignitaries in attendance were U.S. Congressman Samuel S. Stratton, New York State Senator Owen M. Begley, and Schenectady City Manager Arthur Blessing.

In 1963 St. George Church had the honor to display the most significant of all Russian Orthodox icons, “The Virgin of Kazan” which was touring the United States. The priceless icon was adorned with more than 1,000 jewels and was accompanied by the U. S. Secret Service Protection. Priests from the Russian and Greek Orthodox churches in the surrounding areas came to St. George Church to chant the Akathis Hymn.

In the summer of 1983 a major renovation and beautification project was initiated. The icons in the church and altar were restored by art restoration students from the State University of New York at Oneonta.

In 1989, St. George Church celebrated its 75th anniversary. His Eminence, Archbishop IAKOVOS of North and South America was in attendance for the celebration which began with a Hierarchal Divine Liturgy on Sunday, May 28, 1989. Concelebrating the Divine Liturgy along with the parish priest of St. George, Former Father Anthony Nicklas, were His Grace, Bishop PHILIP of Atlanta, Father James Christon, Father Peter Daratsos, and Father Andonios Parapoulos. The celebration concluded that evening with a gala dinner at the Marriott Hotel in Colonie.

During the 1990s the parish youth participated in the Junior Greek Olympics program sponsored by St. Sophia Church in Syracuse, NY. The teams from St. George Church won two divisional trophies overcoming teams from much larger parishes in major metropolitan cities such as New York City, Buffalo, Rochester and Albany. The interior of the church was updated with improved lighting, painting, a wireless audio system and central air conditioning. The annual Grecian Festival continued to grow and became the largest single fundraiser for the church. It is held every September on the weekend which follows Labor Day.

In 2004, St. George Church celebrated its 90th anniversary. His Eminence, Archbishop DEMETRIOS of America and His Grace, Bishop DIMITRIOS of Xanthos were in attendance for the festivities which began with the Vespers Service on Saturday, April 17, 2004, followed by a Gala Dinner-Dance at the Riverstone Manor in Scotia. The weekend activities concluded with a Hierarchal Divine Liturgy on Sunday, April 18, 2004.

St. George Church recently celebrated the 100th anniversary of its founding with a year-long series of events which began in 2014 and culminated in 2015.  His Grace, Bishop DIMITRIOS of Xanthos was in attendance for the festivities which began with a Vesper Service on Saturday, April 25, 2015, followed by a Diamond Jubilee Gala at the in .  The weekend concluded with a Hierarchical Divine Liturgy on Sunday, April 26, 2015.  The Vespers and Divine Liturgy were celebrated by His Grace, Bishop DIMITRIOS of Xanthos along with the presiding priest of St. George and local Greek Orthodox clergy.

Today St. George Greek Orthodox Church has approximately half of the adult members and significantly fewer children than it had during the peak years of the 1960s. As the city’s major employer — the General Electric Company — began to relocate its operations from the city where it was founded, the economy and population of “The City that Lights and Hauls the World” began to rapidly decline. The American Locomotive Company, an industrial powerhouse, also shut down its operations. During the industrial revolution, Schenectady was a city of major importance. But industry and manufacturing no longer drive the economy. Up until the 1970s it was typical of multi-generational families to live in the same city, often within blocks of each other. However, with each new generation, attending college was no longer a luxury but a necessity which has led to careers and job opportunities in often distant locations. The family structure in today’s society spans a much larger geographical area and inter-faith marriages are much more common than in past years. As it was in its early years, St. George Church of today is the home parish of many families who own and operate successful and thriving diners, restaurants and cafes that are located throughout the capital district area. They continue to fulfill the hopes and aspirations of past generations who came to America to pursue their dreams.

It is particularly noteworthy that the church was the childhood parish of a present day Metropolitan and Bishop: His Eminence, Metropolitan NICHOLAS of Detroit (born Nicholas E. Pissare) and His Grace, Bishop DIMITRIOS of Xanthos (born James Couchell). Following his service to the St. George parish in Schenectady, Very Rev. Philip Koutoufas became His Grace, Bishop PHILIP of Atlanta, of blessed memory.

Although small in comparison to other parishes, the members of St. George Greek Orthodox Church remain firm in their resolve to maintain their Orthodox faith and their Greek heritage not only for the present but for tomorrow and the future generations to come.